For sales teams: We have another type of license specifically for you starting with this version.  The factory license that can be downloaded in this page will not work for you. Please contact support@advancedtubular.com for a password to enter this download page.​

Read About Changes Below 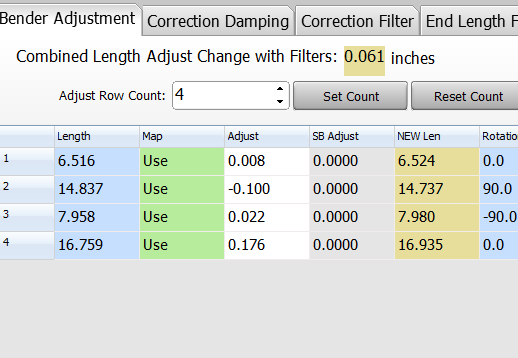 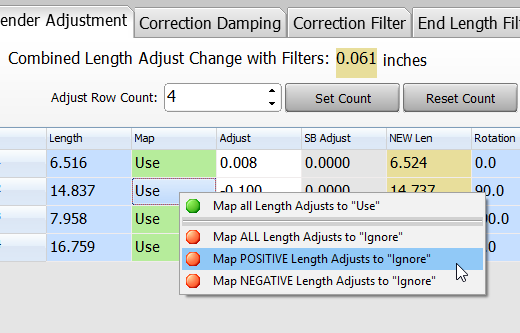 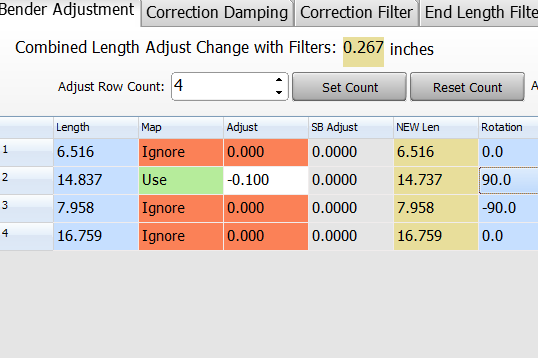 2 - COMCO Corrections Fixed
3 - HERBER Corrections Fixed
4 - New Combined Length ADJUST effect value in Bender setup
This is a powerful new feature that shows the total change you can expect to be applied if the cut length remains the same during a bender correction. It's very helpful for when your process does not allow you to change the cut length.  (For example, if you have a batch of material cut with end forms.  No more changes are allowed to the cut length.)

As shown in this correction example, without any changes to the adjustment data you can expect the material to be 0.061 inches longer on one of the ends.  (Most benders will put this change on the B end of the part.)

See the next screen image.  However, if you map the adjustment to "ignore" on the second straight (-0.057 inches), then the effect is to remove almost any change in the total cut length of the tube.

Version 2.9.21 build 41 - September 28, 2019
New in build 41 - PRECISE Radius FLATTENING QUALIFICATION from SCANNING
​This new measure process allows you to qualify the radius flattening in the middle of the bend angle. The values are calculated from a BEND PROFILE measure.  The sample grid shown below is from a bend profile scan of bends 2 through 5 on VTube-LASER Demo Tube 5.

HIGH ACCURACY
Like the Bend Profile feature below, VTube-LASER depends on a large point cloud of laser data to ensure that the flatness value at the center of the bend is very precise.
​
Version 2.9.21 build 38 - September 11, 2019
1 - New - CORNER PROFILE MEASUREMENT PROCESS
2 - New – PRECISE Radius Qualification with Tolerances
We’ve added a very precise radius qualification grid to the Inspection data menu. When you measure a radius with BEND PROFILE, the information is reported in the grid with color-coded pass/fail information.  The grid shows both the MASTER and MEASURED radii, the deviation (color coded), the tolerance for deviation, and the out-of-tolerance values (also color coded).  The tolerances can be independently controlled just like tangent deviation tolerances.

A NOTE ABOUT HIGH REPEATABILITY
We've been told by users that other metrology packages can report up to 5 millimeters of variation in this measurement. Because VTube-LASER takes in a huge amount of point cloud data, we have found that the accuracy is often better than 0.5 mm.  The more laser data you take, the better the accuracy.
​
3 - New –Radius Qualification Report
​4 - New – Powerful UAC (User Access Control) Enables Passwords for Restricted and Controlled Access to Editing Values
5 - ​New –Simplified OPERATOR SCREEN for User Access Control
The new Operator Screen displays on top of VTube-LASER and carefully controls what operators can and cannot do. It works with the new UAC access system (see UAC in the previous feature). 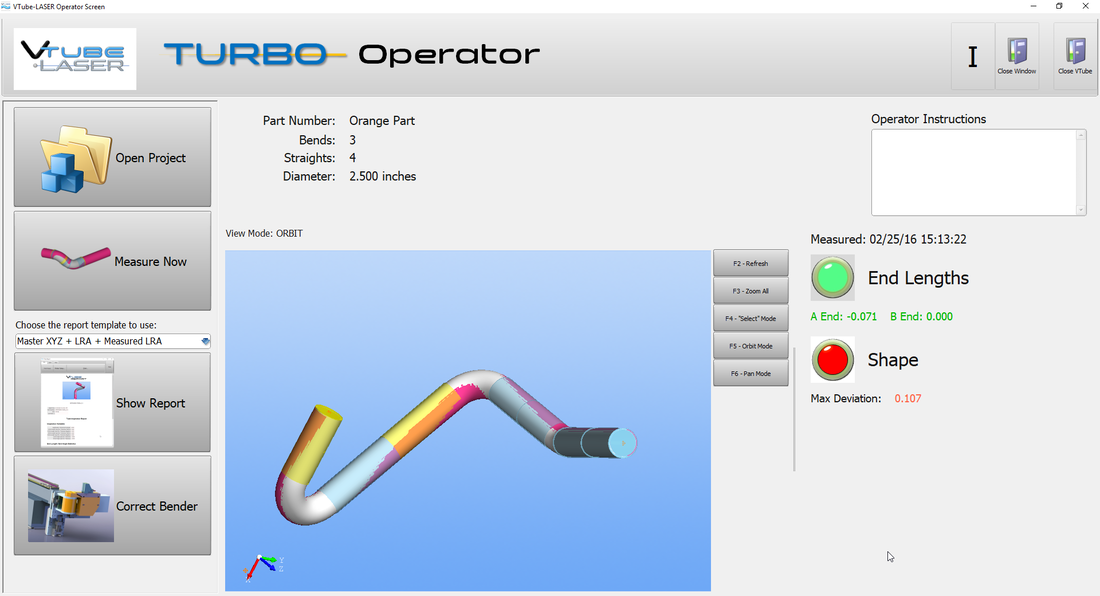 6 - ​New –Bend Profile LASER Scan Accept Type
This new setting allows users to use the timer to accept scans in straights while requiring the accept button for bend profile scans. This makes scanning bend profiles much easier.
7 - ​New – Much Improved Cloud-Based License Activation
​The new license activation system is simpler than the previous two-step system. It allows for registration in one step with preset credentials through the internet 24/7.

​For details on how the cloud-based license activation system works, please download this document.
8 - New - Intel Core i9 Compatibility
​We made changes to VTube to allow it to run better on computers that are using the new i9 chipset. Previous versions, for example, might hang while loading. This version does not. 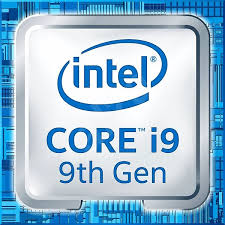 9 - ​New – CPU Usage Optimization
VTube now requires much less CPU usage than previous versions.
10 - ​New – MTA Automation to Ensure that MTA is Used
This new MTA (Measured Tube Averaging) method allows setup technicians to control when MTA measurements are expected by all operators – then guides them through that process without any further setup.
11 - ​New – NUMALLIANCE MES+CSV Protocol
12 - ​New – New CORRECTIONS MAP FILTER “-1 x Val”
13 - ​New – SOCO SV-M Protocol
14 - ​New – “Persistent” is changed to “Global”
​This change in terminology makes it easier to understand what we think of as persistent data. If data it is persistent in VTube, then it is data that is shared across all projects. Therefore, it is now “global.”
15 - ​New – Global Save Banner
​This new banner allows you to see when VTube is saving the global data settings.
16 - ​ New – Bender Setup Terminology
For example, the “Bidirectional Communications” section in Bender Setup is now renamed “Correct the Bender” in order to make its purpose clearer to users.
17 - ​New – Bender Setup RECALL Button Disable
The RECALL button is now disabled for protocols that cannot perform a RECALL in Bender Corrections.
18 - ​Fix – EXTRA End DofBend Value Cleared from Grid
VTube will now no longer place a stray DofBend value in the last XYZ row when decreasing the point count.
19 - ​Fix – NEWPORT News Shipyard Data Changes
We fine-tuned the output for NNSY data based on feedback.